I just got home from a quick three-day trip to Southern Nevada/Northwest Arizona. The first two days were spent in the Las Vegas area, though the first round was actually a bit further out of the way…

In case you weren’t aware that the small Southern Nevada town of Pahrump is in existence, it’s located about an hour west of Vegas on the way toward Death Valley. It’s a bit more of the unpolished old Nevada—a place where you might find a fireworks store or maybe even a cathouse or two mixed in with what is basically a quiet retirement community.

There are actually two golf courses in Pahrump. The main (good) one is Mountain Falls, which is a standard regulation-length course. I had the opportunity to play there back in 2013. That was on one of my earliest golf trips to the Vegas area, so I didn’t even know about a second course until later. Once I found out there is also a short course in town, it’s been bugging me ever since. I knew eventually I had to get back out to Pahrump to check Lake View Executive off my list.

This trip made sense because it was just as easy to take the western driving route from Baker up toward Death Valley and then cut over to Pahrump. Also, I didn’t have anything else that was more of a priority. Prior to this trip, the only two public-accessible courses I had left in the greater Vegas area were this course and Shadow Creek, which I am still not ready to pay full price for! Now, that’s all I have left along with a handful of private clubs.

I called ahead earlier in the week and the lady in the pro shop put me down for a 9:30 tee time. I opted to book over the phone when she told me the rate (with cart) would be $25 instead of the $29 (plus booking fee) that was listed on their online booking system through GolfNow.

I arrived much earlier than expected (closer to 8:30) after a smooth drive up, but the course was pretty much wide open. I played through one group of ladies and then didn’t run into anyone else until the final hole. The total pace was only about 1:40 for the 18 holes.

Lake View Executive is an 18-hole executive layout playing to a total par of 59. There are five short par-4s in the mix along with 13 par-3s that range from 100 yards up to 203 yards. The par-3s offer a healthy variety of distances that allow you to use a number of clubs. Most of the par-4s are easily drivable for a majority of players. There is only one over 300 yards.

The layout is very basic and straightforward as you work your way through a residential community that is mostly mobile homes. All the other people I encountered here were seniors, so I think that’s kind of the main crowd for a course like this.

The conditions here were okay and about what I expected from a low-end executive course all the way out in Pahrump in late May. The tee boxes were pretty beat up with a firm dirt base, but I never too much of a problem finding a place to tee it up. The fairways on the par-4s were inconsistent, but adequate I suppose. The rough was a hodge podge with a few decent areas, a lot of bare hardpan dirt and then mostly patchy clumps. The sand traps were actually alright.

By far the biggest issue for me was the greens. What they didn’t tell me when I booked over the phone—or when I checked in—and mentioned it was my first (and only) time here is that they are currently doing maintenance on the greens. That meant a majority of holes (I believe 12 out of the 18 if I counted correctly) were playing to tiny, stupid temp greens shaved down in front of the normal greens. The few greens still in play were a bit rough and the temp greens were even less consistent. I wasn’t expecting much, but this was a real unpleasant surprise to keep turning around each corner only to see one crappy temp green after another.

I mentioned as I was leaving that they should let people know about that ahead of time. I probably still would have played just because it was finally time to check this one off the list, but at least I would have come in with proper expectations. I don’t imagine they get much out-of-towner play, especially this time of year, but it was pretty clear when I booked over the phone and checked in that I was visiting for the first time. Ultimately, it left a very bad impression on me.

Even if all the regular greens were in play, I wouldn’t be offering a huge endorsement of Lake View Executive. It’s too far out of the way unless you happen to be in Pahrump. And, if you are in Pahrump looking to play golf, you should be focused only on Mountain Falls. 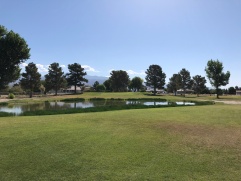 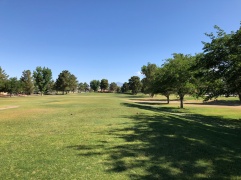 I am now going to skip my afternoon round on Wednesday because it deserves a solo course review. Instead, I will fast forward to my Thursday morning round…

I feel kind of bad pairing this new review of Rio Secco with Lake View Executive, and I must also say that this was much, much more than just a “warm-up” round for Thursday. However, it is a course I have played (and reviewed) previously, so I am not going to write a full review here. You can check out my post from 2016 for some additional details and insights.

That being said, Rio Secco recently went through a minor renovation overseen by the original course architect, Rees Jones. The main goal was to soften up some parts of the course and provide some more playing options for the “average” golfer. This course was initially built in the golf boom (1997) and intended to be a pro-level championship venue. It has been used to host some big tournaments over the years, but is mostly used for regular daily-fee play.

Jones reshaped some bunkers, making some smaller in the process. Some of the steep false edges were altered, some new forward tee box options were added and various other minor changes were made to make the place a bit more player-friendly. I’ve played here twice before and personally didn’t notice any huge differences, but my knowledge of the course wasn’t that intimate from before.

I played with a group from Greenskeeper.org, so we had seven players out there and it was good time with the first group going out at 7:30. I was in the second group and we enjoyed a great pace of under 4.5 hours.

Beyond some of the renovation changes made, the general layout at Rio Secco remains the same. Last time I played, they had switched the nines since the first time I played and that is still the current routing. The only other big change I couldn’t help but notice is that they took down the iconic “Million Dollar Hole” sign that was by the par-3 16th tee box. This was their big promotion for many years and the sign looked like a mini version of the famous “Welcome to Las Vegas” sign. It was a great photo opp, even though the promotion slowly fizzled out of existence.

Even though the promotion is no longer here, I wish they kept the sign because it really was such a landmark of Rio Secco. I guess the new owners wanted to get away from that and decided to take out the sign as part of the course renovation. It’s weird to miss a cheesy sign on a golf course, but I still felt rather sad when I drove up to the tee box and saw that it was gone.

On the positive side of things, the course was in the best shape I’ve ever seen it. Of course, my previous visits were in December and August respectively, so I can’t say I’ve ever played Rio Secco at its best. The tee boxes, fairways and rough were all in great condition. The greens were firm and rolling smooth at medium speeds. The bunkers actually had real soft sand instead of the rocky/coarse stuff you find at so many Nevada and Arizona courses.

Overall, it was a good experience and gave me a new appreciation for Rio Secco. It should go up in my rankings a bit after this visit and it feels like the course now has a fresh feeling moving forward without taking away any elements that made it memorable in the first place (except for maybe that sign). You still have some of the best views of the city from any golf course in the area and a course that is quite demanding. Even softened up a little, Rio Secco still presents a stern test for players of every level.

Side view of 1st green with Vegas view blocked by a couple new homes that were built since my last visit. 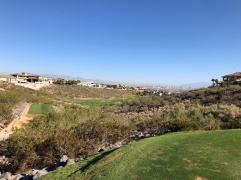 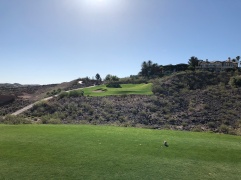 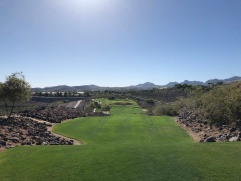 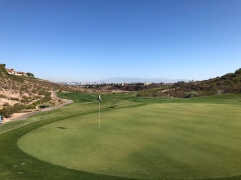 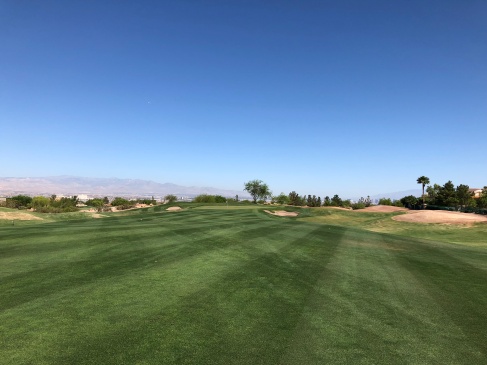 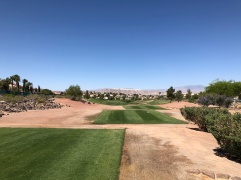