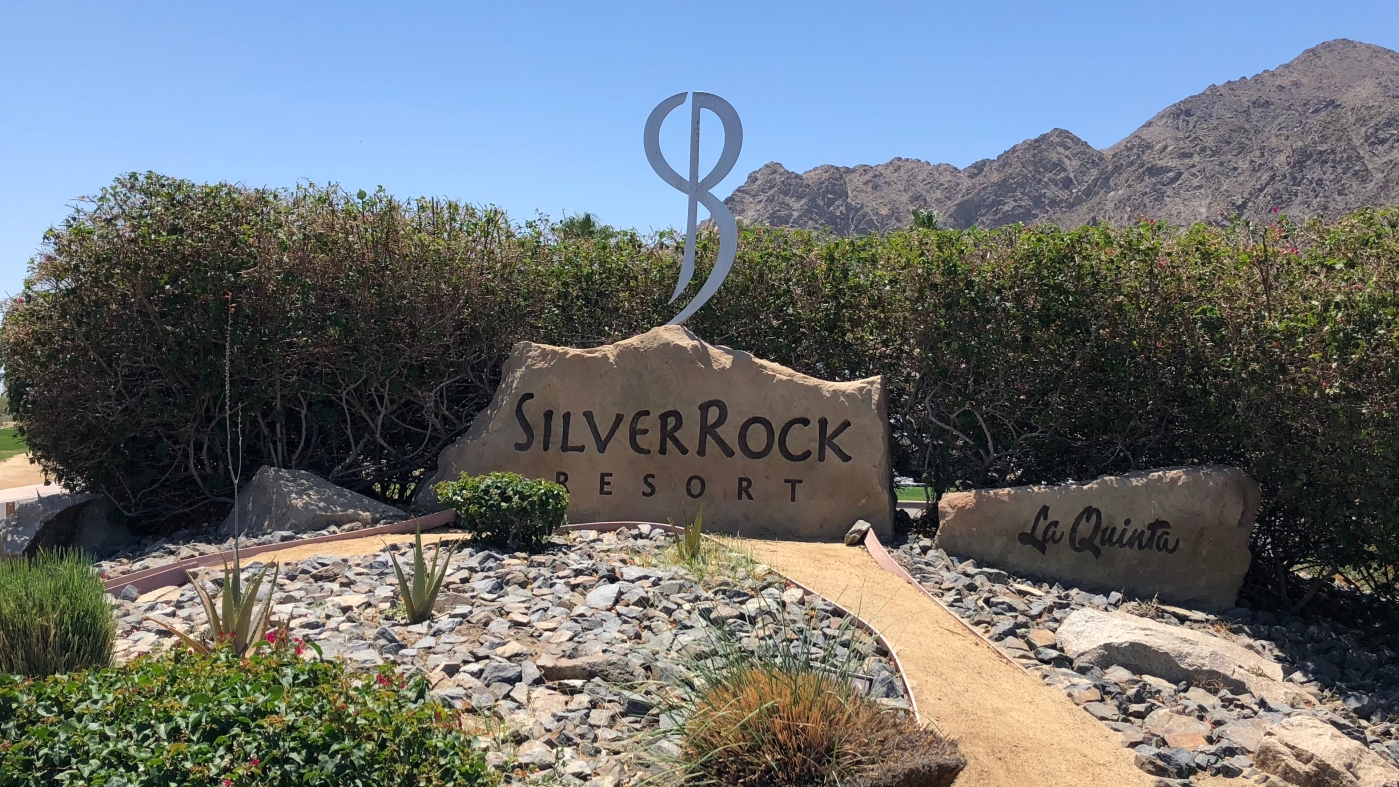 Yesterday afternoon, I finally made it out to the renovated version of SilverRock in La Quinta. After being reduced to a 9-hole course for some time, the full course reopened last fall and revealed its new back nine configuration. I know the renovation was mainly done to make room for the eventual resort that will be on the property alongside the golf course, but I currently don’t know what the situation with that is because there doesn’t appear to be any development on that front. The course and modest pro shop/restaurant are still the only things on the property as of this writing.

I purposely waited a little while for the prices to come down. I figured May would be a great time with the course still being in nice late spring condition and the shoulder season rates being much more affordable. I was able to book a GolfNow hot deal at 12:45 for $37 and that was fantastic.

I was surprised to see the course so busy on a Friday afternoon in late spring, but it was pretty packed out there. I was paired with another single, but the other two players at our tee time never checked in and they sent us off as a twosome. The starter basically pre-apologized, warning us it was going to be a slow round. We were stuck right behind a big group of obnoxious guys (four foursomes, I believe) playing in a scramble format. They were apparently on their second round of the day and were quite lit up by the time they finished, so they were acting like idiots. However, I think the course was pretty backed up behind other groups on the course, so I don’t believe they made the round any slower than it would have been otherwise. No matter how you add it up, it was a pretty brutal pace of 5 hours, 15 minutes.

The last time I played SilverRock was almost exactly three years ago. Here is that review for reference. That visit was only my second round here, so I am by no means an expert on the old routing. However, in looking at my old scorecard and satellite images that haven’t been updated to reflect the new routing yet, I believe I was able to work out the changes that were made. The front nine wasn’t altered at all and they kept that open for play during the renovation period.

As for the back nine, they really just rerouted parts of the course. They removed what was the original 18th hole and added in a brand new par-3 11th hole along the water. The back nine now features an arrangement of three par-3s, three par-4s and three par-5s.

Here’s the breakdown, as I understand it:

The 10th hole is the same as it was. What was previously the 11th hole has been completely reworked and made into a short (drivable for many) 18th hole. More on that funky finisher later. What was the monstrous par-5 12th hole (formerly topping out at 658 yards) has been shortened significantly and is now the par-5 17th hole. It now tops  out at 578 yards and is honestly a much more fair hole considering the placement of the canal crossing.

The current 11th hole is the only completely new hole here and I have mixed feelings about it. It is an interesting par-3 playing completely over water to a green that looks like a speck from the tee. The green is narrow, but it is 50 yards long. Water runs left and behind the green, while the right side is your bail-out zone that also has some slope to help push your ball back toward the green. From the tips, this hole is a scary 212 yards. From the blues and white where most mortals will play, it is 173 and 156 yards respectively. It is kind of a neat hole, but it really doesn’t fit in with the rest of the course design and first-time players will probably hate it because it’s so hard to see your target area from any of the tee boxes. Even with the GPS in the carts, it feels like a mostly blind shot to a very unforgiving green complex.

The new 12th is what used to be the 13th. Previously, it was a long par-4. It has been stretched out to a par-5 with a new teeing area on the other side of the water. I did like the look and feel of this new spot on the course with some bridges and water features connecting the 11th green and new 12th tees.

The former par-3 14th hole is the same as before, though it is now the 13th hole in the new routing. What used to be the long and brutal par-4 15th hole along the canal has been lengthened some and now plays as the par-5 14th. The par-4 16th hole from before is exactly the same. It is just now the 15th hole.

I was glad to see that they didn’t significantly alter the signature 17th hole from the original course. I know some resort plans I saw early on indicated this hole was going to be wiped out, but I think there was enough pushback from course fans that they figured out a way to keep it mostly intact. This is a gorgeous hole and quite an intimidating par-3 with elevated tees hitting over water. Other than being moved in the routing to become the current 16th hole, the only noticeable change I saw was that they removed the waterfall feature that was behind the green. It was extraneous, but it did look nice and kept running water going through the little creek to the right of the green. That creek is now dried up. It is a minor aesthetic downgrade on what is still a spectacular hole.

I mentioned the old par-5 12th hole is now the 17th. That brings us to the new 18th hole, which sits on top of the space where the 11th hole used to be. This new hole is kind of interesting and kind of fun being that it is drivable for many players. From the tips, it tops out at 344 yards. From the blues and whites, it is 282 yards and 256 yards respectively. There are some big, nasty bunkers guarding the lay-up area and providing some challenge to drive the green.

Being a drivable hole, I think it’s a fun addition to the course. I just don’t think it fits as the finisher. A lot of people complained that the original par-5 18th was kind of a weak finishing hole, but I think it was way better than the new one (at least in terms of being the final hole in your round). What I haven’t mentioned yet about the new 18th is that it features one of the funkiest greens I can recall. That’s not uncommon for a drivable hole to have a wacky green complex, but this one is like a moguls course for olympic skiers. It is bumpy, humpy and lumpy.

To really put it over the top for me personally was the pin placement we had yesterday. The very back portion of this green has a rather small hump that falls off in every direction. Of course, the pin was right in the middle of that. It was almost impossible to get to with an approach shot and even short chips and putts made us look silly. It was really like one of those frustrating “anthill” holes you might find at an evil miniature golf course. Fortunately, they won’t use this pin placement everyday and that might make the hole more tolerable for others.

Word is that they are considering flipping the nines at some point and that might help. I’m not sure the current 9th hole is an ideal finisher either, but it would be better. Of course the front nine now is arranged that you could easily finish on the par-3 8th hole right next to the clubhouse. I think that may have actually been the original design just based on how everything is laid out, but a lot of people find it weird to finish either nine with a par-3. However, I recommend going to play Pasatiempo or The Greenbrier to see that it can be pretty cool if done right.

The course was in good overall condition. The tee boxes were pretty much perfect. The fairways were really nice with just a few minor transitional brown/thin spots starting to come through. The rough was pretty solid tee to green and then really nice around the greens. The bunkers were a bit crusty on the front nine, but not in a bad way. They were kind of crusty on top to keep the ball up, but soft enough underneath. Some bunkers on the back nine had newer softer sand. The greens were mostly in nice shape and playing better then they looked. A few had some thin/damaged/sandy spots. However, they all rolled nicely at medium-fast speeds. The greens were quite firm and hard to hold, especially the newer 11th and 18th green complexes.

I know the back nine renovation was done more out of necessity than desire, but they tried to keep things interesting. I’m not sure the new layout is an improvement overall. It’s just more of some new wrinkles that will take some getting used to. I’m sure some people will really like it while others who have played the course a lot previously will potentially hate the changes. I’m glad I finally got to check it out and will hold onto my own mixed feelings until I can play it a few more times. It is still a very recommendable course on all levels and easily remains in the top 5 or 10 public courses in the Coachella Valley.

Nice view of the 8th green from behind the clubhouse. 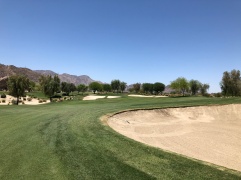 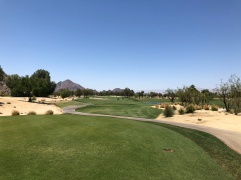 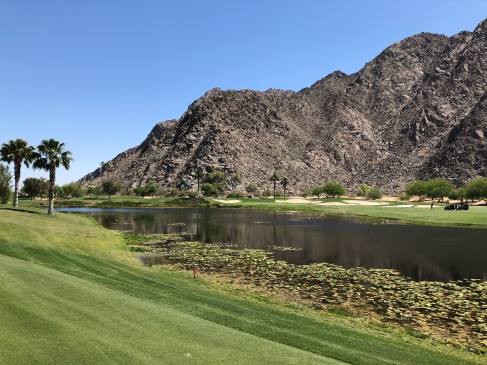 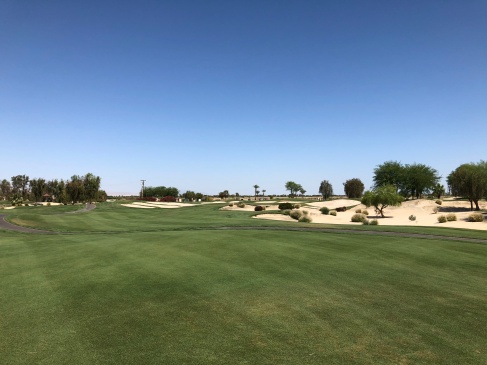 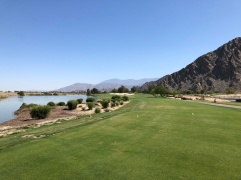 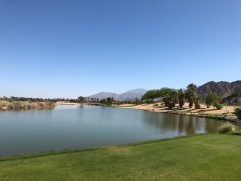 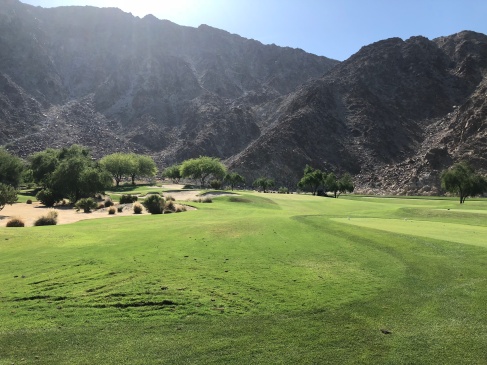 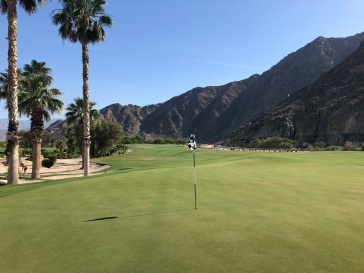 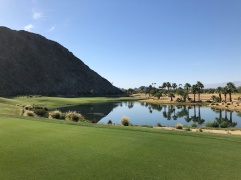 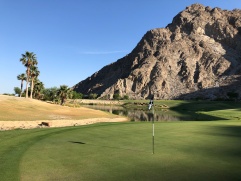 Side view of 18th green.