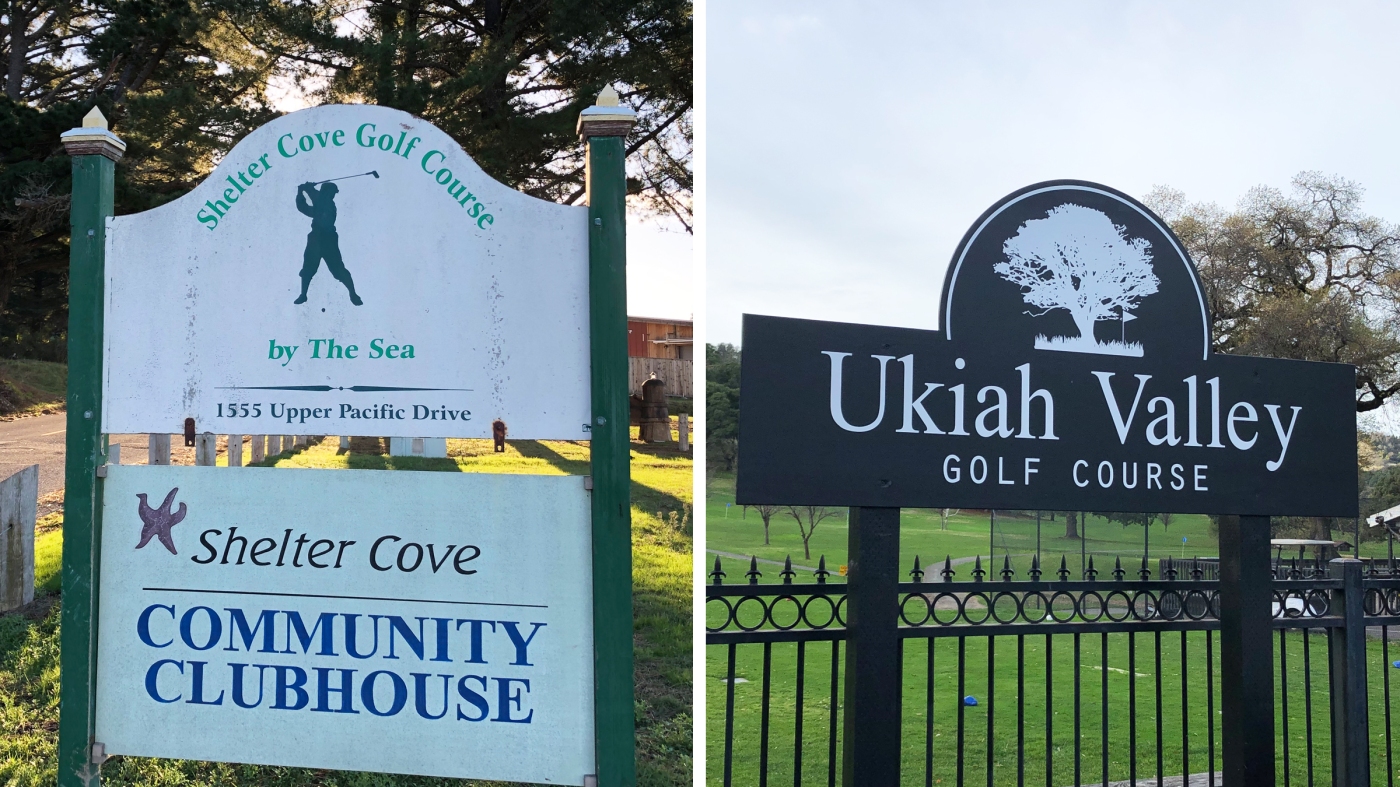 After a nice few days with family in Crescent City, I started making my way home the day after Christmas. Fortunately, the weather forecast was great for the next few days and I wanted to take advantage by playing some more golf. I decided to stay along the 101 down into the Bay Area to check off some of the remaining courses on my Northern California list. I basically went in geographic order as I made my way South down the coast.

You might not believe me if I told you there was a California golf course that hardly anyone has ever heard of, despite the fact that it provides great ocean views on every single hole. Well, welcome to Shelter Cove.

The main reason nobody has ever heard of this course is because it is so inconvenient and it’s honestly not as special as I just made it sound. The little seaside community of Shelter Cove (population just over 800 people according to the signage, and probably not all year-round residents) is kind of a neat little place set very much away from the rest of civilization.

As the crow flies, Shelter Cove is about 20 miles west of Garberville (southern edge of Humboldt County). However, the drive there is absolutely brutal. Once you get off the freeway, it is a very narrow and winding road. It’s a beautiful, but gnarly drive and the road isn’t particularly great. You first go through some little towns and some redwood groves. Just when you think the worst of it is over, you essentially go up and over a mountain before ultimately reaching the coastline. It’s a 20-mile drive that will take at least 45 minutes and requires white-knuckle concentration the whole way.

When you come out the other side, you eventually find Shelter Cove and a simple 9-hole golf course next to the town’s tiny airport landing strip.

I actually made the drive out to Shelter Cove once many years ago after hearing of the course’s existence. However, that was long before I was hardcore about playing anywhere. I thought it might be a hidden gem given its seaside setting. I saw that it wasn’t anything that impressive that day and decided to turn back. I’ve regretted that decision ever since. I eventually realized I would have to come back and make that terrible drive again just to play what I already knew was a fairly mediocre little course.

What did make this time around more appealing was the weather. It was forecasted to be sunny here, which is probably a rare occurrence. I figured I’d at least get some clear ocean views from the course and some nice pictures. That was certainly the case.

There is not much information about the golf course online. There is a simple web page attached to the town’s website and they have a basic Facebook page. It says it typically opens at 8:00 daily all year-round. I called the number listed in advance, but never got an answer. The website mentioned that it was almost always an honor box system there, so it is probably rare you can actually talk to anyone. I wasn’t even 100% certain the course was still open, but now was the time to go on faith and see for myself.

I was glad to see flags on the greens when I finally arrived, and the course actually looked reasonably maintained for winter. I parked in the Community Center parking lot and made my way across the street to the first tee box. They have one of the fanciest honor boxes I’ve ever seen. It’s actually a machine that accepts cash, cards and even Google pay. You put in your payment and push a button for what you want (9 holes = $15, 18 holes = $20 and they also have monthly and yearly plans for unlimited play). You get your receipt and you are on your way.

The biggest bummer about my visit was that the scorecard box was empty. It’s clear they have scorecards, but none were available. I went back over to the Community Center hoping they would have more stockpiled over there, but nobody there knew anything about the golf course. I hate not getting a scorecard if one exists, so I am going to have to follow up and see if I can track one down someday. Or, if one of my fellow Golf Nomads (or any readers of this article) plays there eventually, hopefully they can grab an extra for me if they are restocked by then.

Ultimately, the build up to Shelter Cove is much more exciting than the course itself. It’s not a terrible layout, but it’s also nothing too earth-shattering. The first half of the course heads out toward the cove and then it loops back around the airport runway back up to the Community Center clubhouse. The first half of the course is more interesting as it has some moderately hilly sections up on a little bluff. The back section is pretty open and mostly boring before finishing with an uphill par-3.

The course plays to a total par of 33 according to some online scorecards I have found. When there, I actually calculated a par of 35. However, what I thought were a couple short par-4s (holes 3 and 4) are actually listed online as long par-3s. The yardage is not marked well at this course and I don’t have a rangefinder, so I was really just playing by feel. I would still personally argue that at least the 4th hole is probably a par-4 based on its dogleg layout around a grouping of trees on the left side. It’s actually probably the best hole here as a short, target-style par-4. It would make for a very tough and awkward par-3. SkyGolf says it’s only 216 yards, but it’s definitely longer than that from the back tees. And like I said, it’s kind of a dogleg left design.

It really doesn’t matter too much. Unless you live local and play here often, this is not a course to be taken too seriously.

Conditions from tee to green were rough-but-adequate for a course of this caliber mid-winter. The tee boxes were shaggy and often lumpy, but I was able to find decent spots to tee it up. The fairways were more of the same. They were mowed somewhat recently, but the grass is patchy and the ground is pretty lumpy and bumpy, so lies would vary greatly from shot to shot. There aren’t any sand traps out here. The greens weren’t very good. They were scruffy and slow. There were sometimes gopher mounds and also some dead spots found on several greens. You definitely can’t take putting too seriously here.

From a Golf Nomad perspective, an arduous trek out to remote Shelter Cove to play a run-down 9-hole course was worth the adventure (especially given the clear weather that morning for optimal ocean views). It’s only for the hardest of hardcore course collectors, though. Otherwise, leave this one to the locals. 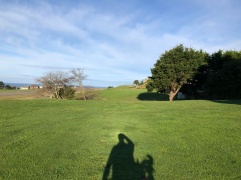 Side view of 2nd green to show how scruffy the greens were. 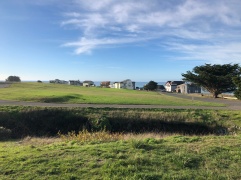 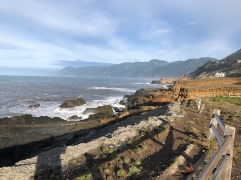 Nice view of the cove from the nearby walking trail.

Behind 5th green with cove view. 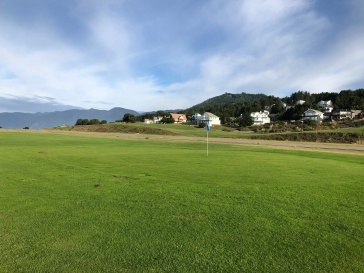 7th approach. Windsock for the airport is right in middle of the fairway. 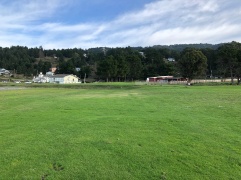 This is another fairly obscure course that I’ve been wanting to check out for some time. Though it’s right along the Highway 101, Ukiah is kind of an isolated town that’s just a bit too far north to be considered part of the North Bay Area along with Santa Rosa, Napa and those Wine Country towns. It’s technically in Mendocino County, so it will fall in my North State Regional Rankings list. I’m actually getting close to splitting that up into coastal and inland lists now that I’ve made a bigger dent in the regions.

I arrived around 1:00 and was able to tee off by myself a few minutes later. I saw plenty of players out on the course, so I knew it wasn’t going to be a super quick round. However, I could tell I would easily finish all 18 before dark. The twilight rate was $33 with a cart, though it was playing as cart path only because it was so wet.

The front nine went smoothly. I played through one walking twosome and otherwise zipped through. I quickly caught the logjam of groups on the back nine and there was nowhere to go after that. Still, I finished the round in about three hours.

I didn’t know much about Ukiah Valley going in. It’s another one without a ton of information or pictures online. Their website says it’s been around (at least in some form) since 1931, which is pretty old for a golf course in this region.

I was pleasantly surprised with Ukiah Valley. This is a very fun (and at times, funky) layout in a very picturesque setting. It is a par-70 design that tops out at 5,850 yards from the blue tees. It’s not a long course, but it definitely categorizes as a major “target” layout. It is pretty hilly (more so on the front than the back). There are plenty of different trees in play along with some creeks and doglegs to force accurate shots from tee to green.

The opening hole is a short par-4 that plays straight uphill on the approach (at least a 2-club difference for most). This is followed by the funkiest hole on the course. The par-4 2nd is a 90-degree dogleg left that’s requires a blind lay-up shot off the tee through a pretty narrow chute. If you get in a good position, then you’ll have a longer shot into the green that’s tucked back into a little hillside.

The rest of the front nine has you going up and down this hill before you cross the street for most of the back nine. On this side, it flattens and straightens out some. However, there are still plenty of natural hazards in play and positioning is just as important on most holes.

Amping up the challenge last week was the extremely wet conditions. There was zero roll-out on any shots as the fairways and rough were all just super soft and muddy. They obviously hadn’t been able to mow anything too recently, so the tee boxes and fairways were pretty shaggy, as well. It looked beautifully green and lush as you’ll see in the pictures, but it was a sloppy mess to play through.

Beyond the mushy turf, I will say the sand traps were in decent shape. They had good sand, but were not freshly raked. Many had turkey and deer tracks running through them. The greens were also pretty good all things considered. They were soft, but freshly cut and rolling pretty well at medium speeds. There were a few minor dead spots on some greens, but nothing that affected play much. With the hilly terrain, the natural slopes come into play plenty here, so it’s generally best to stay below the hole. The greens here are also quite small, putting an additional premium on accurate approach shots.

Ukiah Valley is not a must-play and I can’t quite give it a “hidden gem” status, but it was way more entertaining and attractive than I expected it to be. The layout is probably going to be a bit too funky for some folks and the soggy winter conditions made it hard to fully enjoy this time around. I’m used to the mush in Norcal this time of year, though, so I know not to put too much judgment on that. It’s one that’s probably worth checking out if you happen to be spending any time around Ukiah. There isn’t much else around unless you head back down toward Sonoma County.

Looking down at 8th green from 2nd tee. 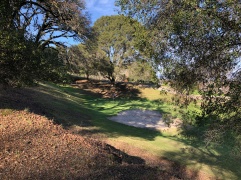 Side view of 2nd green. 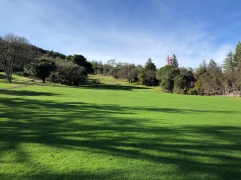 Side view of 8th green. 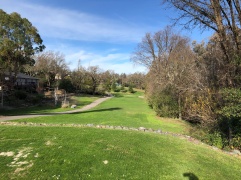 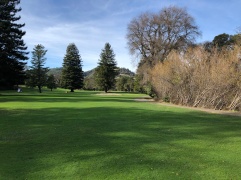 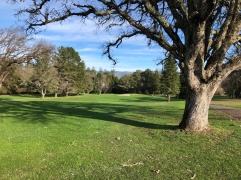 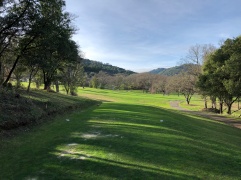 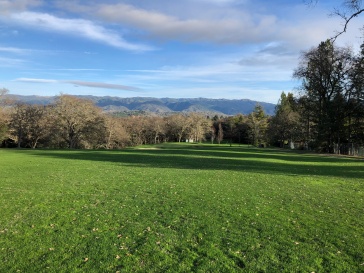 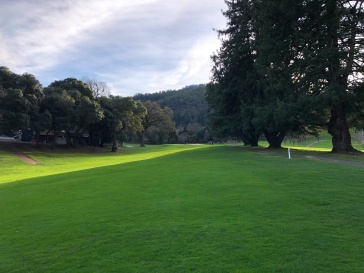