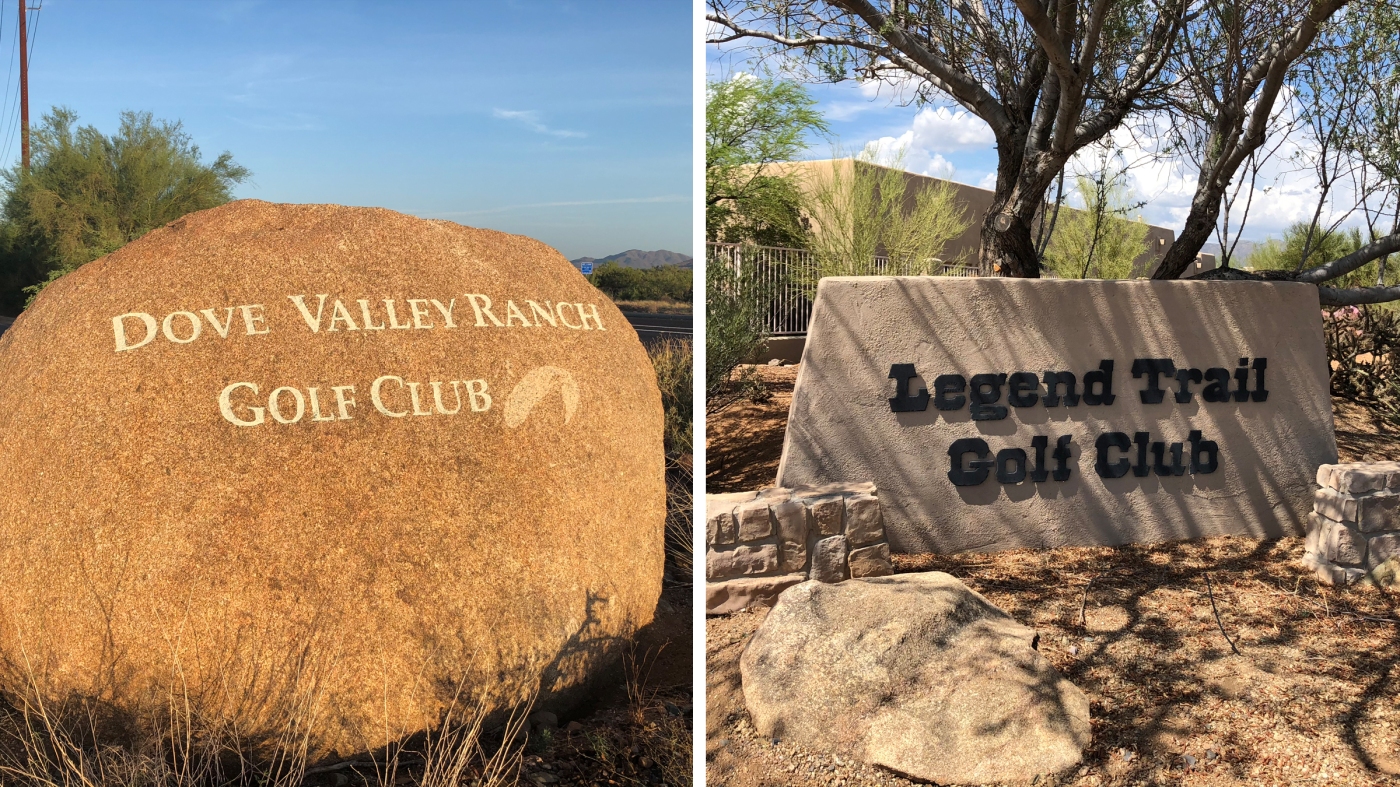 The first day of my recent Arizona trip found me playing 36 holes. I played Desert Mountain (Cochise) in the morning and then played an afternoon round at Quintero Golf Club with a group from greenskeeper.org. I had already played Quintero before, so I am not going to it review it again this time around. Let’s just say it remains one of my favorite courses in the valley, but you can check out my original review here.

This takes me to Friday, when I ended up playing 54 holes in the North Scottsdale area (for lack of a better term because this area also encompasses towns like Carefree and Cave Creek). The main round for the day was a 10:00 tee time at The Boulders Golf Club (North Course) with GK (which I’ll review in a separate post), so that left me time before and after to try and squeeze in some solo rounds…

With a tight early morning time frame and budget also in mind, I narrowed down my choices to a few courses close to The Boulders. Ultimately, Dove Valley Ranch turned out to be the best option because they had a 6:00 tee time available and the rate was only $39 (plus tax).

I assumed that was the first tee time out when I booked, but they told me it was actually the second time when I checked in. I mentioned my time crunch and the pro shop guy offered to put me in the first group with a couple members, who he said were very fast players. We ended up having a foursome and the twosome behind us (the guys I was originally supposed to play with) looked raring to go as we teed off around 5:50. I thought my move might backfire if they ultimately played through us. However, we quickly left those guys in the dust. We were finished with the par-5 1st before they were even off the tee box. After that, I knew then that things were going to work out perfectly.

We were actually on a sub-three-hour pace until we caught a slow back nine twosome and had to play behind them for the final few holes. Still, it couldn’t have timed out better to give me plenty of time to get down the street to The Boulders, which is only about 10 minutes away from Dove Valley Ranch.

I didn’t really come into Dove Valley Ranch with any expectations one way or the other. The booking came together pretty last minute and I didn’t research it too much. I did know it was a Robert Trent Jones II design, so I figured it would be at least worth checking out.

The front nine here is very forgiving and pretty simply designed. There isn’t too much trouble to get into, the fairways are generous and the greens aren’t tricked up at all. The 9th hole is probably the most interesting one on this side as a par-4 with water running up the left side the entire way.

The back nine definitely perks up by the time you reach the 11th hole. After that, it changes into much more of a target style course. The terrain here is very flat and there are no real elevation changes throughout Dove Valley Ranch. However, they took advantage of the natural desert setting and various natural washes running through the course.

Throughout the back nine here, you will find yourself criss-crossing desert areas to separated landing areas. Some holes will have multiple crossings. You will find some sharp doglegs and uncomfortable lines. You may also find yourself hitting less than driver on several holes.

Probably the most memorable hole here is the par-4 14th. The tee shot has you hitting out to a landing area that is fairly wide, but actually more tight than it looks. This is because the hole then doglegs sharply to the left. You have to hit over a wash area to a slightly elevated green, so you will want a clear angle. Too far left on the fairway and you may have trees in your way. Too far right and you will have a much longer shot in on this relatively short hole.

Otherwise, there aren’t too many other specific holes that stick out in my memory. I definitely found the target-oriented back nine much more enjoyable than the front, but the course overall isn’t that distinctive or exciting compared to so many others in this area.

The course was in decent late summer condition and saw some wear from the hard storms that hit overnight. A few wash areas were a bit muddy and there were some low-lying spots on the course that were pretty squishy. Beyond that, it was good enough. The tee boxes were nice. The fairways had plenty scattered thin/bare spots, but adequate coverage for the most part. The rough was pretty good throughout. It was cut down and easy to play from. The bunkers were good, as well. The greens were firm and a tad crusty, making them a bit bumpy and rolling at slow-ish speeds.

For the right price, Dove Valley Ranch is a fine option. I was satisfied for what I paid, but I also know this place can be much more expensive in season. I’m sure the conditions then are greatly improved compared to late summer. However, the layout will still remain as just okay. The overall value is relative to what you might find yourself paying at the higher-end courses around here. 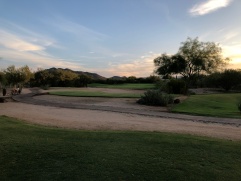 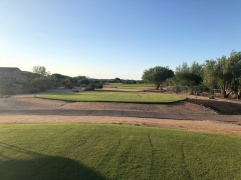 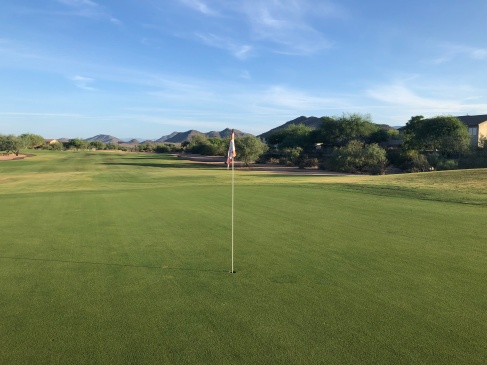 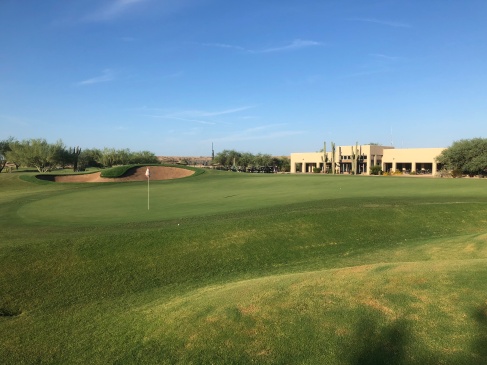 Side view of 9th green and clubhouse. 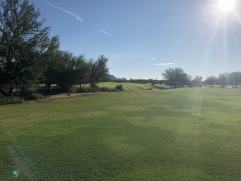 Side view of 13th green. 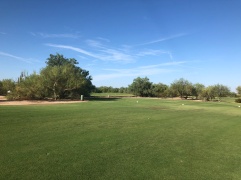 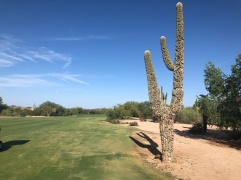 15th approach with one of the more “abused” saguaros I’ve ever seen. 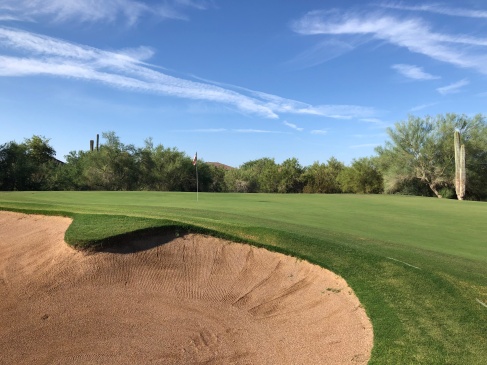 Our round at The Boulders went pretty smoothly and we were finished in about four hours. That left me plenty of daylight to play at least one more round that afternoon/evening. The day before, the monsoon season weather got quite sketchy in the afternoon. We had some close calls over at Quintero. Fortunately, the clouds building up were not looking nearly as intimidating on Friday afternoon and weather was not a concern.

I still wanted to stay close to where I was, so I went to one of the other options I was considering for the early morning round…

This was actually going to be my first choice in the morning, but they didn’t have an early enough tee time available for me. Naturally, it was my first choice for the afternoon round instead.

Though I had read some mixed reviews online and none of the photos I saw looked that inspiring, I was still very intrigued by Legend Trail because it was designed by Rees Jones. Having just played the ultra-dramatic and challenging Quintero the evening before (which he also designed) and generally being a big fan of Mr. Jones’ work, I wanted to check this course out. Of course, I also usually like the designs of his brother/rival, RTJ Jr./II, and wasn’t super impressed with Dove Valley Ranch in the morning.

Like Dove Valley Ranch in the morning, Legend Trail is also a tale of two nines. The front nine here is also quite forgiving and pretty basic. It’s not boring, but it’s not that exciting either. I was surprised knowing this is a Rees Jones course because simplicity and subtlety are generally not traits associated with his designs. Needless to say, I was feeling a tad disappointed, though the par-4 7th is a pretty nice hole with the only water hazard on the course.

However, this layout really starts to get interesting once you reach the 11th hole. I found holes 11-17 to be very enjoyable (and demanding), with much more of the Rees flair you might expect to find. It’s nothing on the level of Quintero in terms of drama, but it’s definitely more eye-catching than the first 10 holes here.

The 11th is one of the holes that really stands out with a unique (some would say super funky) design. It is a sharp dogleg left with kind of a split fairway. The tee shot is uphill and then the hole turns back downhill for your approach. There is a swath of desert nastiness right at the corner and bisecting the fairway to give you some risk-reward decisions. You can lay up to the right part of the fairway and then have a longer downhill shot to the green. Or, you can try and hit over the corner to the more hidden left strip of fairway, which will leave you with a much shorter and more level approach. This is one of those quirky holes that you probably have to play a number of times to find your comfort level.

After this, the layout gets a bit more hilly and canyon-oriented. There are some forced carries in play and plenty of risk/reward decisions especially on the two great back-to-back par-5s. The 16th hole is especially fun. You have a forced carry to the first fairway. Then you hit over a ravine to another fairway for your second shot. Then you hit over another wash to a very well-protected green. It’s all kind of a double-dogleg in the process as you jump from one landing area to the next. Or, if you have the length and gumption, you can try and clear more on your first or second shot for a rare look at eagle.

Adding to the enjoyment was the fact that Legend Trail was in very nice shape all around and they didn’t seem to have any noticeable storm damage here. The tee boxes, fairways and rough were all very lush and had good coverage throughout. There were a few weak spots here and there, but it was easily the best-conditioned course I played on this day—at least from tee to green. The bunkers were very good, as well.

The greens were actually very nicely kept and consistent. It’s just not the greatest summer turf as it’s a very grainy and coarse bermuda (maybe it’s a hybrid or something else altogether?). It is a very deep green color and not the crusty/dry summer bermuda you find a lot of other places (see Dove Valley Ranch). They rolled fairly smooth and held shots well, but were just really slow. Many of the hole cuts were dried out and scruffy around the edges, so it looks like they probably hadn’t changed hole positions in a day or two.

Legend Trail won’t fall into a “must play” ranking for me because the front nine isn’t anything special and there are so many top-shelf courses around here. However, I would consider it a great summer value pick because of the nice conditions and very affordable rates. They do offer dynamic pricing here, so the later you book in the offseason, the better deal you will likely find. In season, you will paying a pretty penny to play here and I’m not sure it’s worth too high a price. 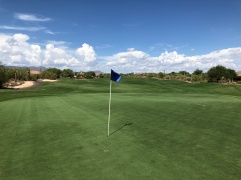 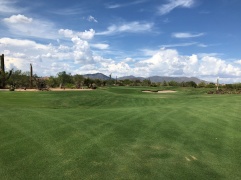 Side view of 7th green. 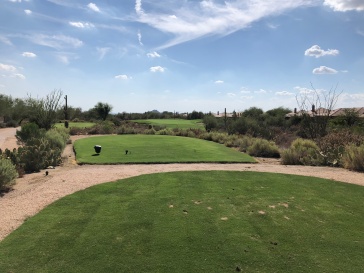 Side view of 9th green. 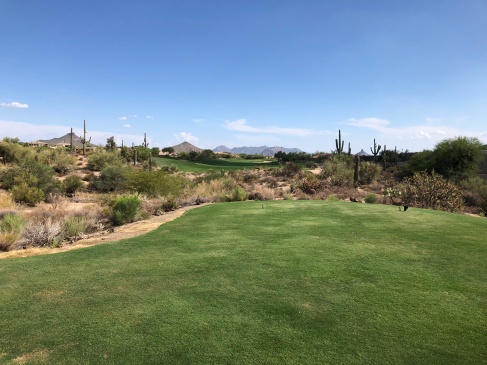 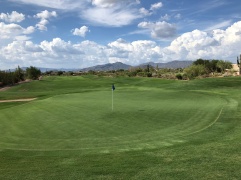 11th approach from the corner angle. 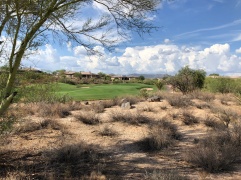 Side view of 12th green. 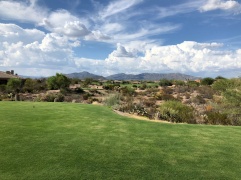 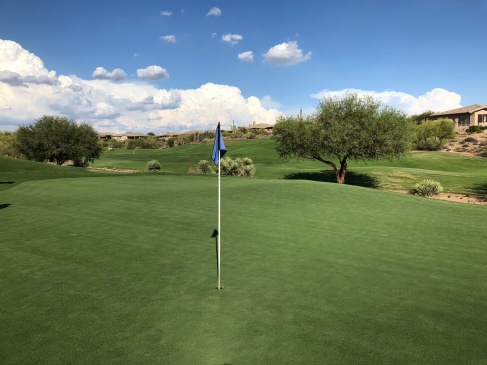 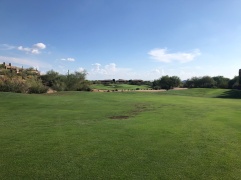 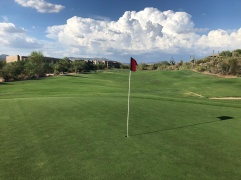