Normally I try to take advantage of some free golf deals on my birthday. However, this year a friend invited me to join him at Torrey Pines. We have been talking about lining up a round here for awhile, so I decided that was a pretty nice way to spend part of my birthday. My friend is a San Diego resident, so he is able to book tee times in advance without having to pay the lofty non-resident booking fees.

We had a 3:14 tee time and the twilight price was $66 for me to walk as a non-resident. Obviously, whether or not you are a San Diegan will really impact the overall appeal of Torrey Pines. Locals get such great deals, they can be spoiled having these two amazing courses in their own backyard. At the prices they pay, they can put up with the crowds and the ebbs and flows of course conditions here. For the rest of us paying big money to play here, Torrey is more of a rare splurge and enjoyment can be affected by your timing.

I would have considered it a one-time special visit when I played all 36 at Torrey Pines back in March 2013. (By the way, it’s hard to believe that was in celebration of my 300th course played when I just surpassed 1,000 last month—almost exactly 5.5 years later if you’re doing the math.)

The South Course had already been renovated by Rees Jones (well ahead of the 2008 U.S. Open) by the time I played it. Yet, the North Course underwent its own big renovation a few years after I played it. In 2016, it was reworked by Tom Weiskopf.

I’ve been wanting to play it again ever since the renovation, but just never had the chance. Having a twilight tee time already booked made it convenient for me to finally get back down there, even though the round was still slow (around five hours) and we barely finished 18 in the dark. Slow play is a common problem here because they have the low rates for locals yet still attract a lot of out-of-town play because of the Torrey Pines name. They stack the tee sheets and there are a ton of walk-on players all day every day.

I have to say I was relieved to finish, and I was also glad to be playing with a local who was very familiar with the North Course before and after it had been altered. He pointed out some of the subtle and not-so-subtle changes in the layout. It’s all the same basic routing, but the greens were redone along with many of the bunkers. Some holes were shortened, others were lengthened and some just changed a little.

The first thing I noticed immediately is that they switched the nines. That is normally something that annoys me (especially when it is a course I play regularly). Here, I think it was a very good call from a “destination golf” perspective. The more signature ocean- and cliff-front holes of the North Course were previously on the front nine, while the more inland holes are definitely less memorable.

Now, they have it switched so you get the signature stretch on your back nine. It’s a better build-up and payoff as you play an entire round. Of course, if you had teed off any later than our group with a twilight round, you may not have gotten the full effect of this if you are playing the best holes (now 14-16) in the dark—if you even get that far! If you are visiting Torrey North for the first time, you will want to pay more to start earlier and ensure a full 18. As it turns out for me, we played that stretch under a gorgeous sunset over the ocean and it couldn’t have been a prettier time to play these particular holes.

The other thing I couldn’t help but notice was how many trees were removed in the renovation. It definitely has a much more open feel throughout the course. It sounds like part of this was getting rid of some older, dying trees, but it was mostly done to open up more ocean views throughout the course.

The best examples of this are on the 14th and 16th holes. The 14th is a nice dogleg left that turns the corner. It previously had many more trees behind the green and obscuring the ocean view on your approach shot. Now, that area is all opened up. It’s a nice sight as you turn the corner, but it also gives you less of a frame of reference (i.e. less depth perception) as you hit into the green. There’s also no protection if you go long. It’s a pretty big drop behind this green, so you don’t want to go too far over. It’s an interesting trade-off of form over function.

The 15th (formerly the 6th) is still the same basic stunning signature par-3 on the North Course. It didn’t seem like they altered much here and they sure didn’t need to touch it. It’s a fun and beautiful hole with a huge drop from tee to green and a gorgeous view of the coastline behind the green. This is one of my favorite par-3s anywhere.

As for the 16th, I have some mixed feelings about this one. They did shorten this dogleg right uphill hole a tad by moving the location of the green up. I think that makes it more playable for the average golfer. This one used to have a big row of trees lining the left edge along the cliff. I liked how that looked and it impacted how you had to play the hole. They took all these trees out, which completely changes the perspective. It certainly opens up a completely unobstructed ocean view, but I am not sure it improves the hole design.

The last obvious change made here was on the greens themselves. Not only were they reshaped (and, in some cases, repositioned), but they were also resurfaced with a bentgrass turf. They still have the classic poa annua on the South Course, but decided to change to bent on North for various reasons. The new greens have plenty of undulation, but there is much less of a natural break toward the ocean. In fact, I felt these greens broke a lot less than they looked. I vastly over-read many putts in my round. I say when in doubt, keep it inside the hole.

Overall, the North Course was in good, but not great shape on this visit. It certainly wasn’t as nice as my first time here (which was closer to the PGA tournament and well before the drought). The tee boxes were nice. The fairways were good for the most part with the (mostly) kikuyu turf cut tight. I generally had good lies, though I did notice numerous thin spots throughout. The rough was much less consistent. Most of it was cut down, though a little patchy, so lies would really vary. Then there were still some very thick/deep patches mixed in randomly. I was unfortunate with most of my lies in the rough. I always seemed to find one of those deep patches or just a clumpy spot that made for a tougher recovery. The sand traps were nice with soft sand and we had a couple fried eggs in the group (seemed to be softest near the lips, which is not ideal).

The still fairly new greens were extremely firm and hard to hold. I don’t think I was ever able to make a ball mark myself, yet the greens were very pock-marked with old ball marks despite them being so firm. It was strange. The were often bumpy and rolling on the slow side. I have to say I was pretty disappointed in the greens. I’m glad they kept the poa on South, and I hope they aren’t tempted to change it. It just seems better suited to the seaside climate and the high amount of traffic these courses get. They do have two separate practice greens side-by-side by the clubhouse, so you can practice on the appropriate surface for either course.

I would still consider both courses at Torrey Pines absolute must-plays, even if you have to pay the full non-resident rates on a one-time splurge. However, I can’t say I loved the North Course as much this time around. Maybe it’s because I’ve played a lot of world-class courses in the years between my two visits. The handful of holes on the back nine still offer plenty of “wow” factor. However, what is the front nine now with a lot of the trees removed feels kind of plain. You get some peripheral ocean views throughout the course, but the hole designs feel somewhat bland. There are a few holes on Torrey North (before and after) that I’ll never forget, yet there are a lot that I have already forgotten in the week since I played.

So there’s my review of the “new” North Course at Torrey Pines. Many will say “improved.” Others will say it was better before. I’m stuck somewhere in between, but I tend to lean toward the latter opinion.

Side view of 18th from alongside the clubhouse. 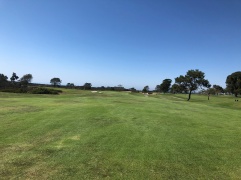 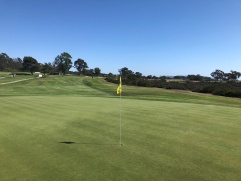 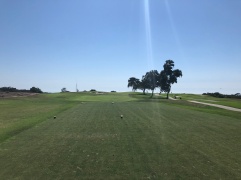 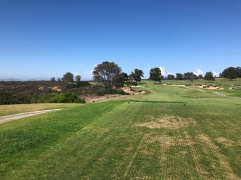 4th approach with a swanky new bunker on the left side of the fairway.

Looking down on 5th green from 6th tee.

Side view of 10th green. 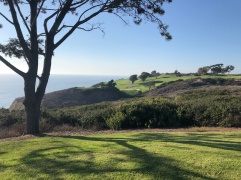 Overlooking the cliffside holes from the 11th tee. 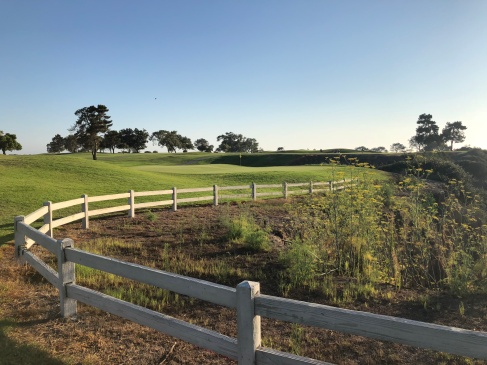 Looking back across canyon at 12th green. 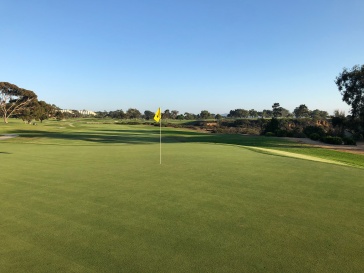 Closer side angle of 14th approach.

Side view of 14th green.

Different angle (and lighting after a 15-minute wait on the tee box) of the 15th from the green tees. 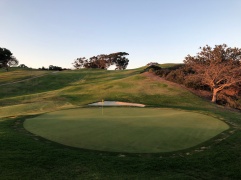 Looking down the coastline from the back tees of 16th. 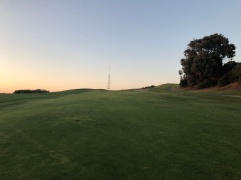 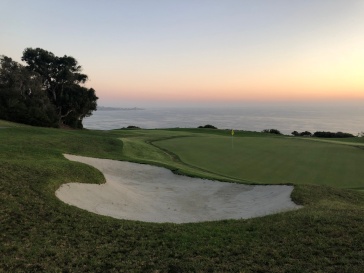 Another nice sunset view of 16th while walking up the hill toward the 17th tee. 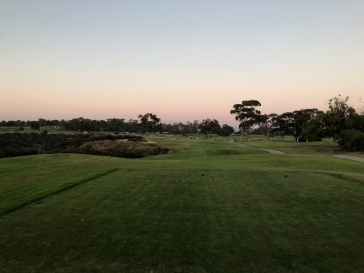 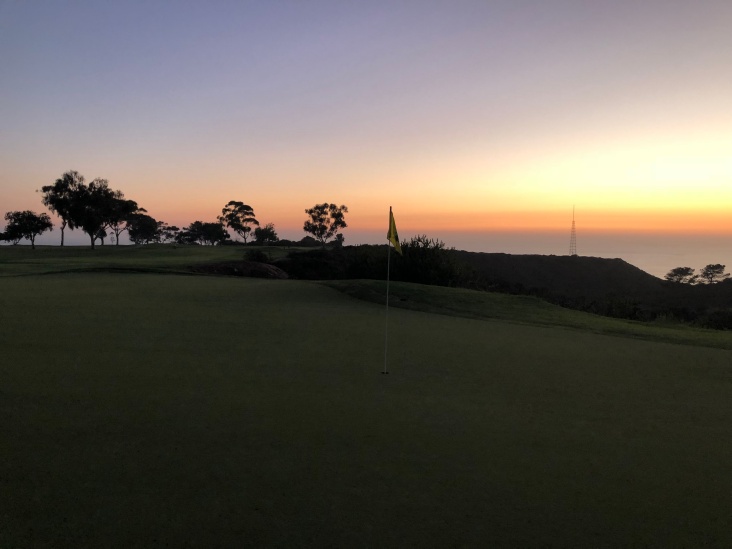 Behind 17th green with the last bit of usable sunlight. Wasn’t able to get any pictures of 18 in the darkness.