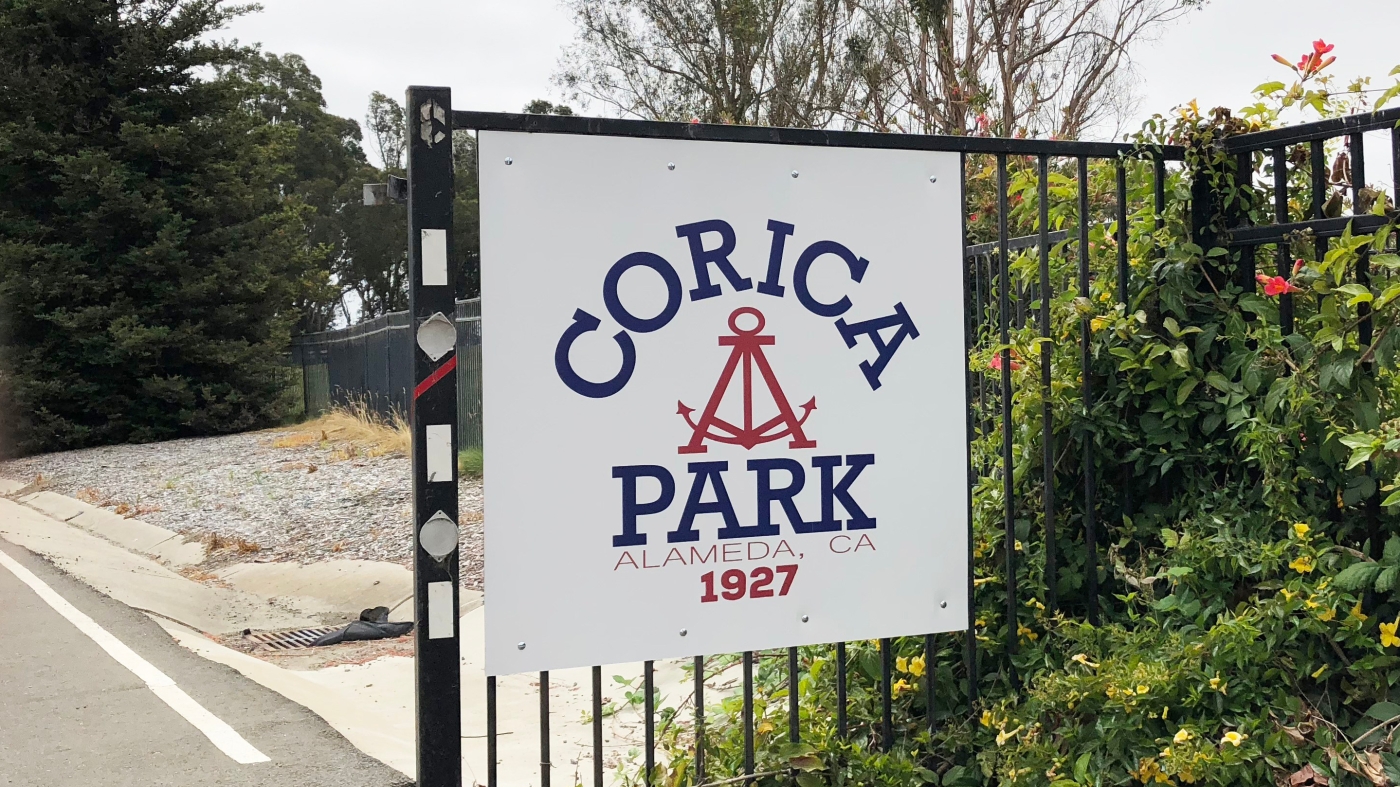 Hooray! We finally made it through all six days of my epic Northern California/Nevada golf adventure from a few weeks ago—just in time for my next trip a week from now! After 4 days in the Tahoe/Reno area and another in Monterey, the final day of my trip took me to Alameda in the East Bay Area.

I was there to take part in a special event. Special thanks to my good friend, John Hakim of Greenskeeper.org, and George Kelley of Greenway Golf for helping me secure an invite to the VIP Grand Opening of the Corica Park South Course.

The name “Corica” may sound familiar to some. The facility here used to be known as Chuck Corica Golf Complex and it’s actually home to three courses. They are in the midst of a massive multi-year overhaul right now, along with the official name change to Corica Park. They previously did some renovations to the Mif Albright Par 3 Course, which I was also able to play during my visit. And, they just shut down nine holes of the North Course (formerly known as the Earl Fry Course) to begin its major renovation.

However, the star of the show is what is now simply known as the South Course (formerly the Jack Clark Course). It had been shut down for some time as it underwent a complete transformation at the hands of the agronomy specialists of Greenway Golf and noted course architect, Rees Jones.

The course officially reopened to the public on June 22, 2018. We were there on June 20 for this special celebration that was mainly media and other people connected to the project in various ways. It was a fantastic event with food, freebies and even some nice swag from Linksoul. Corica Park is home to the first official “Linksoul Lab” that will act as the new pro shop for the North and South Courses. The pro shop for the short course is located across the parking lot next to the driving range, in case you are wondering.

George Kelley, John Ashworth and Rees Jones himself were on hand to give some speeches before Jones hit the ceremonial first tee shot. Then, it was a 1:00 shotgun outing with my group starting on the 13th hole. Afterwards, there were food and drinks and everyone was able to mingle and talk about what they thought of the course.

And to be clear, what they did to the South Course was beyond a renovation. They essentially buried the old Clark Course (designed by William F. Bell) and started over with a new design on top of it. The routing is essentially the same, but it’s an entirely new course created by Jones. The North Course (originally designed by William P. Bell) will essentially go through the same process. However, I got the sense it will be more of an agronomy upgrade as opposed to a complete redesign. They will eventually bury the old course and the new course on top will have stronger agronomy features to stand up to either drought or oversaturated rain conditions, which can both cause problems for courses in Northern California.

I never had the chance to play any of the courses at Corica prior to this day, so I can only speak to my experience as a first-time player of the new course. By all accounts, it’s vastly different than what used to be there. One of the guys in my group was a local who had a lifelong connection with the complex. I enjoyed watching him standing on each new tee box and muttering to himself “Wow. This is awesome.”

With no changes in elevation and a location right next to the airport, there are some limitations with the landscape here. Jones decided to build more of a modern links style course that was heavily inspired by the Sandbelt courses of Australia. It’s built to play in the prevailing winds, which there was plenty of when we played. It’s designed to be forgiving enough for a casual muni golfer, yet crafted well enough to provide challenge a very skilled golfer. Most of the fairways are wide and forgiving. The greens are large and undulated, and there are options to play ground or air approach shots.

As is the case with many Jones courses, the bunkering plays a huge role at Corica Park South. The bunkering here is fantastic with a rough-hewn look and a combination of fescue and native California bentgrass lining the lips and mounds surrounding them. They are well-placed and often deceptive because of the overall flat landscape. What looks like a greenside bunker from a distance may actually be 50 yards short of the green.

You will notice a lot of bunkers and native grass areas in the foregrounds of my photos. This is a difficult course to photograph from ground level because it is so flat and open. Also, we had a bright and harsh afternoon sky that also doesn’t help with pictures, so those hazards provided much-needed perspective to show how interesting this course actually is. Honestly, I don’t think the photos do it justice, but I like to show things from an actual player’s perspective.

From an agronomy standpoint, the tee boxes, fairways and primary cuts of rough use a hybrid bermuda that is designed to stand up well to a wide range of conditions and also the salt water in the air. Though there are no significant bay views on the course, it is really close to the waterfront. The greens are a bentgrass. They have been treated (with iron, I believe they said) to hopefully keep poa annua away. That’s never an easy task in coastal California. When I was there, the greens have a kind of gray-ish appearance as you’ll see in the pictures, but that color should dissipate over time to reveal the normal light green/yellow bent we all know and love. The old course had primarily kikuyu fairways and they will do their best to keep that away, as well. The revamped Albright Par 3 Course already incorporates the same turf combination and the new North Course will, as well, when it is ultimately completed.

Apparently, they used a lot of reclaimed materials in the construction of the new course. They took old turf from the Raiders’ practice facility and used it to line the bunkers. We were told that if you were to dig all the sand out of some bunkers you may see yard lines and logos underneath. Please don’t do that, though!

I’m not sure what the signature holes are here. I did like the stretch of holes 10-14. It’s not a great part of the property playing along a street that easily comes into play with a pulled drive. However, this is the more narrow part of the course that requires some accuracy off the tee. There are also some trees along this stretch to block the wind a little. Most of the course plays out in the open, so the wind really affects things.

My favorite holes were probably the 8th and 16th. The 8th is a very short par-4 with a tee shot over water and a good risk/reward layout. Plenty of bunkers guard both the lay-up areas and around the green.

The 16th is a nice par-3 with a natural hazard/marshy area playing along the left side and one of the more demanding green complexes on the course.

The course was in great shape as it has barely been played yet. Tee boxes were great. I thought the fairways closest to the clubhouse were more dry/yellow and a tad thin while the majority as you got further out on the course were much more lush and green. Everything is meant to play tight here for roll-out and ground play options. The greens were awesome with nary a blemish and they were rolling well at medium/fast speeds.

The bunkers were incredible with brand new sand. I like how they use the Aussie style with the sides being packed firmer and the soft sand fluffed up in the middle/bottom where it’s flat. The primary cut of rough was fantastic and then you have the outer “native” fescue/bent areas that are currently super knee-to-waist deep in some areas. It looked fantastic and I’m glad they had it this way for our first impression grand opening, but it could be a challenge for slow play once the muni crowd gets out here. It’s basically a lost ball or impossible to hit out of if you do find it. It sounds like they will be monitoring stuff like that very closely over these first few weeks of regular public play and making adjustments as needed.

Eventually, the long-term plan is for the North Course to remain the more budget-minded course and the South to be a little more expensive as the showcase layout. Locals and regulars should have no problem getting good deals. Out-of-towners may be paying a bit more.

And that begs the question. Is this a “destination” course with the nice new layout and Rees Jones name attached? I personally don’t think it is quite that. Of course, this was the last round I played after four days in Tahoe and another in Monterey, which are true golf destinations. Visitors should enjoy their rounds at Corica Park on the South Course, but this renovation/rebirth seems like more of a gift to the local community that has supported the complex for all these years. It’s a massive improvement and a good model for other agronomy-related renovations that we may see taking place at similar courses looking toward the future of golf. 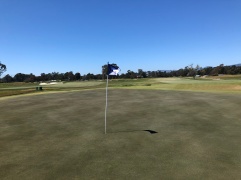 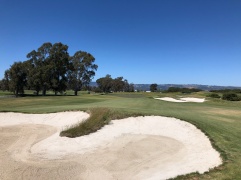 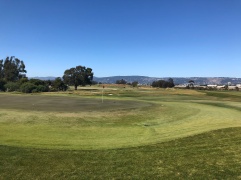 Side view of 5th green. 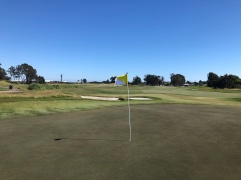 Close view of 7th green with water hazard behind. 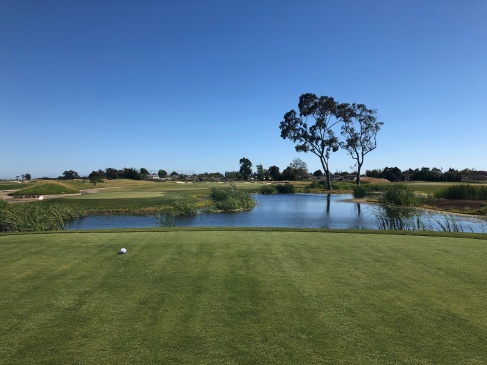 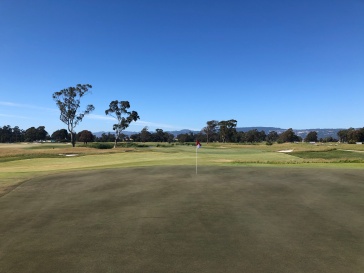 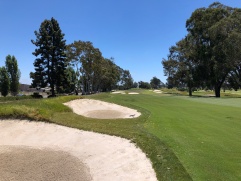 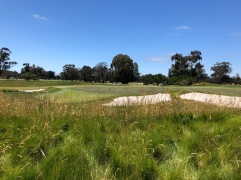 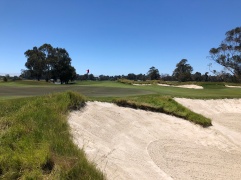 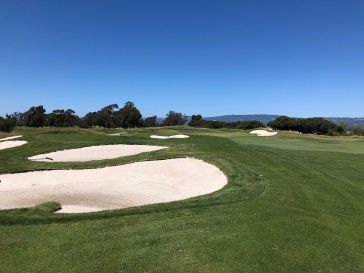 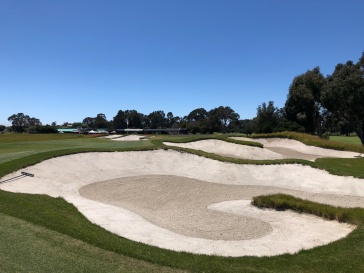 I briefly mentioned that I did have time to play the Mif Albright Par 3 Course before the main event started. I’m not sure if they are keeping the Albright (whoever that is) name attached as they dumped the Fry/Clark names from the other courses. It is still listed on their website as such, but not on the scorecard.

This is a true “pitch and putt” 9-hole layout. The longest hole is 147 yards while most holes are much shorter. Most players won’t need more than a wedge and a putter to play it.

They do have very tiny mats on the tees, but also areas where you can tee it up. I just used the mats for expedience as I was in a bit of a time crunch. Luckily, there was hardly anyone on the course and I breezed through quickly.

As I’m sure was the plan (even though the South Course was still being worked on when this one reopened), the Par 3 Course feels like kind of a mini version of its new big brother. The greens have some good undulation, the bunkers are legit and there is all sorts of mounding around the course with the same fescue/bentgrass turf. It was more cut-down here, though, to be playable for the mostly beginner/youth crowd. The short course is next to the big driving range and some nice practice areas, so it seems like a great youth learning facility with a fun little course to boot. 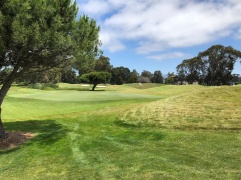 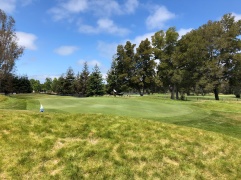